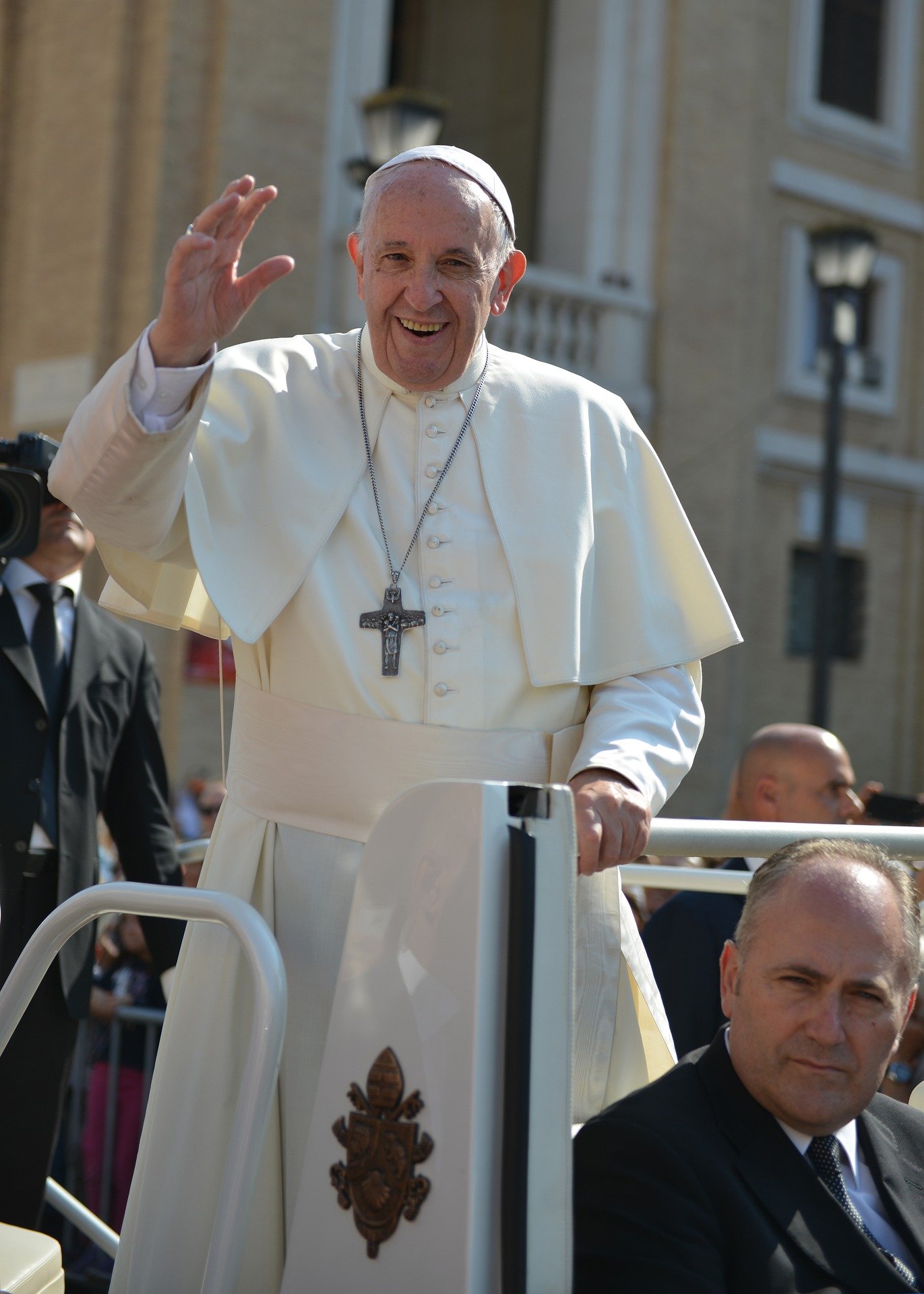 The pope who is the head of the Catholic Church and the Bishop of Rome has different vestments for different occasions which we normally see him wear, which may have made us wonder what this vestments are ,what they mean ,why wearing each one at a particular events and the history behind it also with the name

The papal mitre is one of the most instantly recognizable pieces of the pope’s wardrobe. It is the ceremonial headdress that only the pope, as well as cardinals and bishops, are authorized to wear.

It is also amongst the most regal of the pope’s accouterments, standing tall, and often ornately decorated. It is a folding cap that consists of two identical parts, stiffened by a lining and rising to a point—some say this resembles a fish with an open mouth. It is almost always white, trimmed with gold.

This piece of papal clothing is documented as first having appeared in Rome around the middle of the tenth century, and this early form looked more like a crown than a peaked cap.

The mitre is a symbol of authority, and its legacy is said to stretch back all the way to St. Peter—considered the first pope—who was depicted on Roman coinage as wearing one. Indeed, its height, ostentatiousness, and unique form make it a sort of Christian crown for the leader of the Catholic Church.

The stole is a strip of material about 4 inches wide and 80 long that is generally embroidered with Christian symbols. Most prominent is the cross, which is sewn into both ends, as well as the middle, where a priest will kiss the stole before putting it on. It is normally woven of silk.

Where the soles of priests lower in the ecclesiastical hierarchy cross over the chest, the stole of the pope remains simply draped over the shoulders, the ends hanging down and to the front, to make room for the pectoral cross, which is worn in the center of the chest.

The symbolism of the stole lies in the fetters with which Jesus was bound in preparation for His crucifixion, signifying the sense of sacrifice and duty that comes with the papacy. The pope takes on a massive amount of responsibility when he ascends to his office, and the stole represents this.

The cassock is what you’ll almost always find the pope wearing, and is an instantly recognizable ankle-length garment

Although the cassock has largely fallen out of style within the Catholic Church, it is still a major part of the pope’s wardrobe. He wears the cassock when not celebrating religious services—it’s his everyday uniform, so to speak, called the house dress. The pope’s cassock is white, whereas those lower in the Catholic hierarchy are most often seen in black versions of the garment.

The word “cassock,” is Middle French for “long coat,” and evolved from attire worn by soldiers and horsemen, which later become a long garment worn in everyday life in ancient Rome. The ecclesiastical version of the cassock arrived later, around the 17th century.

The meaning of the cassock is quite simple—it represents the clergy, just as any uniform represents the organization of its wearer. It creates a sense of unity, and the white color the pope’s cassock marks him out as the singular leader.

This piece of the pope’s clothing is a small, round skullcap. Amongst the clergy, the color of the zucchetto denotes the wearer’s rank, and lower ranking members must always remove their zucchetto in the presence of a higher ranking member of the clergy. It is usually made from silk, and features eight triangular panels joined to form a circle.

The highest color, white, is worn by the pope. Next is scarlet, worn by cardinals, and then bishops, who wear amaranth. Meanwhile, priests and deacons wear black.

One interesting note about the zucchetto is that, if a visitor offers the pope his or her own zucchetto, the pontiff will often remove his and replace it with the gift, giving his old one to the visitor. Pope Benedict XVI and, more recently, Pope Francis, have done this often. So if you want a papal keepsake, bring a zucchetto with you the next time the pope is speaking!

Like the cassock, the zucchetto is a marker of the clergy, helping the church leadership to stand out and take on a uniform and organized appearance.

The pallium is another sash-like garment worn by the pope, similar to the stole, but worn very differently. It is a circle of fabric that is worn around the neck, with two cloth pendants that hand down in the front and back. These pendants are about two inches wide and are weighted down with pieces of lead covered in silk.

This piece of religious clothing is reserved for the pope and archbishops, but the latter are not authorized to wear the pallium until they receive permission from the Holy See—and even t hen only on special occasions.

The pope is the only one who may wear the pallium when he wishes—the garment represents the supreme pastoral power of the pope, and any who wear it symbolize their participation in this power. This has been the tradition since around the 4th century and the reign of Pope Marcus.

The pallium is one of the most sacred garments of the pope that is generally only used in the most solemn services.

Usually combined with the stole, the mozzetta is one of the most interesting of the pope’s garments, and is an elbow-length cape that covers the shoulders and is worn as part of choir dress, which is intended for public prayer and services.

The mozzetta is inextricably tied to the pope’s authority, and is a sign of his sovereignty over the Catholic Church.

Notably, Pope Francis made a stunning statement by refusing to wear his mozzetta when he took on the papacy. His lack of this garment signified extreme—unsettling, to some—humility, a trait which he continues to this day.

The papal shoes are the red leather shoes that the pope wears when outdoors. They are made of red Morocco leather, and are decorated with gold braiding, with a gold cross on the upper part of each shoe.

These shoes are one of the few remnants of the color red that remain in the papal regalia—red was, historically, a symbol of wealth and power because it was the most expensive dye. In fact, at one time, these red shoes could only be worn by the Emperor of ancient Rome, the Empress, and the pope.

Pope John Paul II changed the color of the papal shoes to brown, but Pope Benedict XVI brought the trend back, choosing the color for its association with martyrdom.

Most recently, Pope Francis, in his signature humble style, has switched the color to simple black. The papal shoes seem, then, less a representation of office, and more a personal choice for each of the popes.

Pictured here in December 1939, Pope Pius XII, wearing the triregnum, bestows a blessing during a visit to the king and queen of Italy. The triregnum is the three-tiered papal tiara, or triple crown, that was placed on the head of the pope during the “coronation” part of the inaugural mass, Beck said. “It was last worn by Pope Paul VI, who seemed to think better of it because during the Second Vatican Council, he dramatically put it on the altar at St. Peter’s Basilica and said to sell it and give the money to the poor,” Beck said. No pope has had a coronation or worn the triregnum since.

Now that you’re more familiar with this language, take a look at what the pope is wearing when next he speaks. You might just find that you understand more than is being verbally said.